Totnes Pride 2021: In Conversation with Lucy 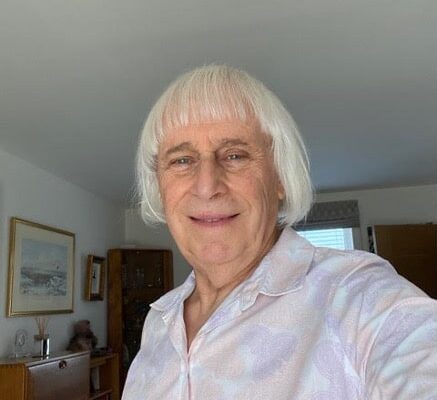 I am a 76-year-old gay trans widow, with a Gender Recognition Certificate. If there were such thing as a stereotypical trans person of today I would be nowhere near that. I have been incredibly fortunate in my relationships including my family and friends, career, financial position, and the self-awareness gained in my life experience. The social environment has changed enormously too, so it would be easy to dismiss my experience as not being relevant to the young gay and trans people of today. However, I have been plagued by the same emotions as everyone else, whatever their age, the doubts, fears, conflicts, lack of confidence, and so on. The only difference is that I have been lucky to have had many more resources to draw on in dealing with the turmoil of these emotions than most others. Some things don’t change though, “plus ça change…”.

Whilst I have a strong preference for female pronouns, I am not precious about it unless I sense it is malicious. I have given long-standing friends the option of continuing to call me David but so far no one has taken up the offer.

My late wife and I moved from West Sussex to Devon 23 years ago after we had both retired. Our son had by then left home. We became involved in several voluntary roles as “normal” heteronormatives. 15 years ago, she developed breast cancer, caused by radical radiotherapy in 1972 for Hodgkins Lymphoma and had a double mastectomy and chemo. She became very angry and when I didn’t respond to her as well as I should, we decided we had to sort ourselves out. Turned out we were actually angry with ourselves, not each other. The outcome of that difficult process was she came to terms with her sexuality, and I began my trans journey.

She gave me amazing support and encouragement, thankfully I had the financial resources to secure my treatment privately at my own pace. She was intimately involved in my surgery. Heather died from pancreatic cancer in September 2019, we had been together for 58 years. Despite her terrible illness the last few years had been the most intimate and loving of all our time together. It’s been difficult since then, not only have I had to come to terms with her loss, but I have had to learn to be trans on my own. She had always been my mentor, minder, and soul mate, most LGBT+ have to make their journey alone.

When and how did you come out? Who was the first person you came out to and what reaction did you get?

We both came out to our son and daughter in law 9 years ago. My son said “to have one deviant parent is bad enough but to have two is just not fair” They both have been brilliantly supportive. At that time, we had found ourselves in our own bubble and we didn’t come out to anyone else, there didn’t seem to be much to be gained and I didn’t want to cause any awkward situations for Heather.
When her pancreatic cancer was diagnosed, we knew it would be terminal. She was adamant I had to implement my Enrolled Deed Poll before she died, as she didn’t want anyone saying I had waited until she had died. We came out to my brothers and closest friends. They have all been completely accepting. After I had Probate, I implemented my Deed Poll, obtained my GRC, and came out to all our other friends.

The universal response has been a surprise, praising my “courage” and most interestingly, they felt honored, privileged, or proud I had told them. Some also said they had noticed a big change in both of us but had not asked.

Since I have made myself visible and upfront socially, I have been consistently amazed how nice, kind and accepting pretty much everyone has been towards me. I decided it was my duty to integrate myself into as much of society, to be visible, and promote LGBT rights whenever I can. For instance, I am a volunteer at The Rowcroft Hospice. I was asked to lead a session at a seminar for professionals on end-of-life issues facing LGBT+ patients. Sadly, it was Covid cancelled. Since then, I was asked to join the Steering Group and workshops on a major project there. I am also involved in a Community Arts Project here in Bovey.

My experience of discrimination and acceptance seems so different to that of most younger fellow travelers. I am sure my age is a factor. I am not in a workplace and I am financially secure but I have come to believe it is also to do with being upfront and open about being a trans female, being confident and proud of my individuality without being strident. Perhaps most importantly being my authentic self who is just trying to be a nice, kind human being.

What was life like for LGBTQ+ people when you were growing up?

In my lifetime homosexual men were still being chemically castrated, I was 22 when the 1967 Act was passed. Homophobia and misogyny were much more prevalent and the concept of transgender barely existed at all. I always knew something was wrong and that I didn’t want to be male. Sadly, I didn’t have the vocabulary or knowledge to articulate my discomfort or the circumstances to do anything about it.

In those days young people hardly had a voice. It was a stiff upper lip and just get on with life. The internet has been transformational in the former and society is now more diverse and liberal in the latter.

What places did you go, if any, to be with other LGBTQ+ people?

It was only after Heather died that I felt any need to explore the LGBT+ community. In the end I concluded that nobody loves a fairy when she’s 40, I was not looking for a relationship and I live in a different world from most other LGBT+ people. It was good to do exploration though. The reality seems to be that my life experience and situation are so different, connecting with younger people is not easy for either of us.

I have very few fond memories of my childhood or school. I did a lot of sport, cubs, scouts etc. and I was never bullied but I never fitted in comfortably. I never understood why. I got my 3 A levels at 17 and had to leave school. On leaving home with almost nothing, I became entirely focused on making myself financially secure and caring for Heather and my son. I played the role of a normal heterosexual married man, and somehow managed to suppress my true self. Happily, it turned out Heather was doing the same thing.

Was there anything that was particularly difficult for you as a young LGBTQ+ person?

Not really. As I said you just had to get on with the hand which fate had dealt you, especially in a small market town in the depths of Shropshire, which I did. I became completely focused on escaping from the life I had been born into. My inner discontent was buried. Thankfully it did rise up like Lazarus when the reasons for its burial went away

How, when, and where did you meet and how long have you been together?

When we were both 16, I met Heather on a blind date at 4 pm outside Woolworths on 2nd November 1961 and that was that. We were joined at the hip until she died.

Luckiest day of my life. The happiest day was the day of our son’s wedding.

If you have been to any Pride or LGBTQ+ events, tell us your happiest memory.

Never been to a Pride event. I would have come to Totnes Pride, but it always clashed with my eldest grandson’s birthday.

If you could go back and tell your younger self something, what would it be?

There wouldn’t be much point in doing that, my younger self would not have understood what I was saying. I could never have achieved as a trans person what I have done, I’m just eternally grateful have found my true self in time, although it would have been better to have started earlier than I did.

Lastly, what would you like to say to young LGBTQ+ people now, what advice would you give them?

Everyone travels their own individual journey; I am a child of another time and my experience is so different to that of any young person today that I would not presume to give any advice. However, as human beings, we all have similar traits and thoughts.

Perhaps the best I can do is to hope that sharing my own difficulties and learnings might give some reassurance to a young person that every thought and emotion they have has been experienced at some time by someone else, and hope there maybe something they can take which will help them on their own journey.

Some of us seem to know intuitively who and what we are. For others, like myself, getting to know my real self and learning to live that life was hard. It took me a while to accept that being trans or gay only means what it means to me. Trying to be whatI thought I should be or what I thought other people think I should be, was hopeless. I became determined just to be what I want and need to be. This was also so important when it came to the question of presentation.

I learned how important it is to listen to and face up to all my thoughts and feelings, especially the negative ones, otherwise, they never go away. I realised it would be better to have realistic, or even pessimistic expectations. Setbacks are inevitable and unrealistic expectations make it even harder to deal with them.

The turning point in my journey was when I came to the decision that whatever the consequences, however bad, from coming out, I would have been in a better place than where I was. This gave me not only the resolution and strength to go through my transition but also the confidence to be myself.

It was helpful as I went along to set myself intermediate goals which I could genuinely commit to achieving. Also, to find out as much information as I could about trans issues and other trans experiences. That helped me to develop the self-awareness needed for a successful transition. I found learning the ability to have critical conversations with yourself are an extremely powerful facility.

Things rarely turn out to be as we expect and that was certainly my experience. For instance, I was taken completely by surprise at the reaction I had to my surgery, my GRC, and new birth certificate, I had not realised how important they were to my inner self, and the surprise was wonderfully positive. Back to the value of moderating my expectations, I suppose.

I have found that the more confident I have become in being and presenting as my true self, the easier my relationship with the rest of the world has become. I am convinced that the key to easy acceptance is just to be authentic. It also helps to be nice and kind and to actively engage with other people. It can be most disarming.

Thanks so much for sharing your story Lucy!

This site uses Akismet to reduce spam. Learn how your comment data is processed.

Check in on your LGBTQ+ friends! This #MentalHealt

Are you a family member of an LGBTQ+ child or youn